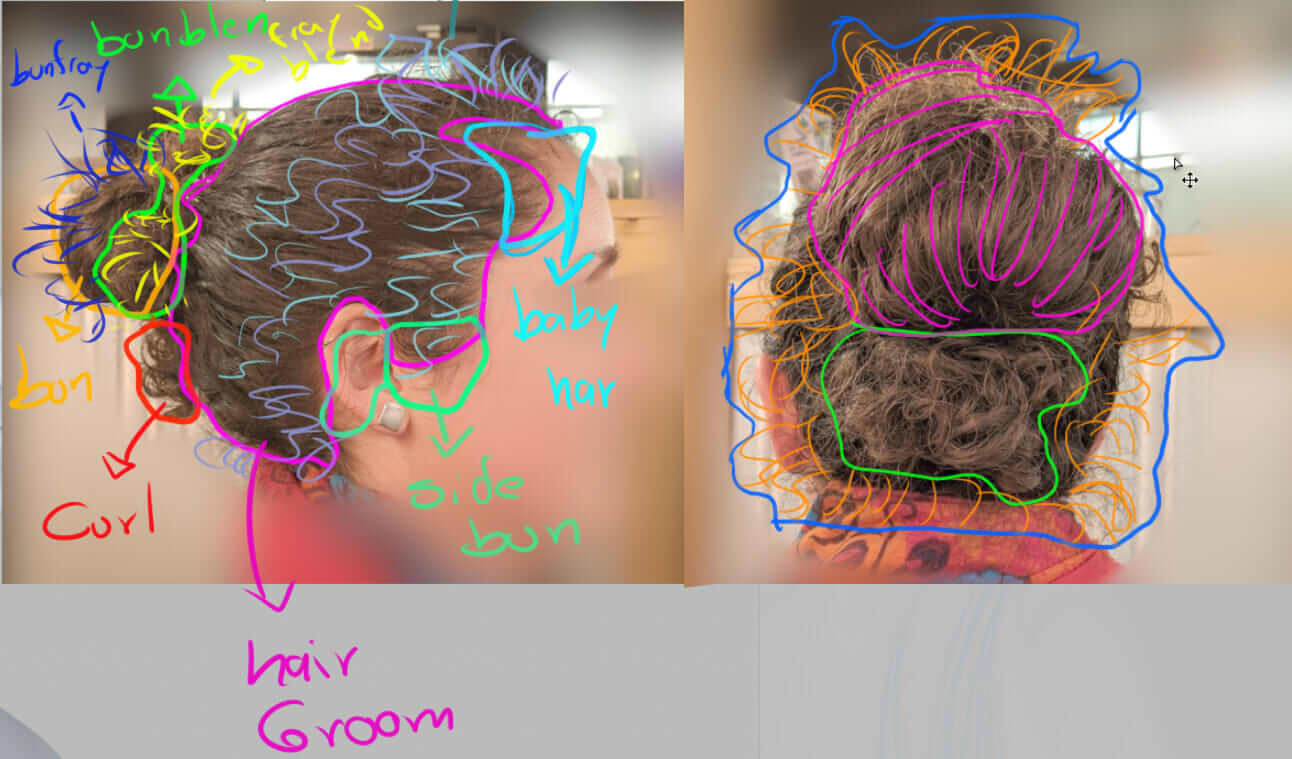 Another round of feedback on patreon that we decided to make public for all to see.  This  is an example from Momoko Okabe from Canada, who is open for oportunities.

Remember that his content is sponsored by all patrons, if you like it please support and share. If you want to see the other feedback round you can find it here.

Here is Momoko’s message on our discord server:

Hi group, I am doing hair groom in xgen and would like share my WIP. Any feedback would be appreciated.

As part of our patron tiers we offer feedback when possible, and this is the result of those sessions.

When working on digidoubles the most important thing is to work from Macro to Micro, and not to rush when going to higher detail levels. The base is really important and on many occasions is more important than the low level detail as most characters are not seeing from close.

One of the most common mistakes that early groomers make when working with hair is that there is no planning. XGEN being one of the plugins that show this pretty easily as you need to set your project first before starting your groom, or have proper names on the models, if not you will find a lot o issues later.  Most of the common mistakes that we find on all our Grooming groups like our facebook CG GROOMING ARTIST or on our PRIVATE FACEBOOK and DISCORD groups for patreon.

Apart from proper naming and project setting, that are not part of this feedback round, we need to do a proper plan for the groom division, which has a lot of variables that you will be able to see on a later blog post that I will link here.  For this one, we will focus mostly on division by hair type and complexity.

Under most circunstances this will be too many grooms, but we are focusing on type of hair and breaking them into parts for an easier control over a complex shot pipeline. For example if the wind is subtle and we want some guts to be seeing on the FRAY GROOMS* then its easier just to simulate those if we have them divided.

The back curl will be super simple to do as a separated groom with guide clumping, but complex to do as part of the main groom

Baby hair is normally done as a separated groom because of its characteristics.

Buns are treated the same as ponytails, there are generated from different geos. You can see this on my ponytail tutorial and my bun tutorial.

Lets start with the flow you need to improve it for your ref, the most important parts for a groom when blocking are the flow and the silhouette. If we compare the groom and the image we can see that the groom is pretty simple at the moment, and mostly done using straight lines, which are not that common to see, and give away a CG look. Most groom feedback focus on this area as its pretty common for the guidecurves to be extra simple.

Its good to make the note that you can get most of the noise and flow effects with noises and not with guides; if you apply them to the big clumps. But, this will lack the control, so this technique will be mostly used if the character doesn’t need to match closely to the reference.

We can focus by area to make the analysis easier to digest.

If you look at both silhouettes there is a big difference in them because both, the frays, that will come later. but also the model, and the amount of hair that you are not taking into account. Curly people gets clumps and bubbles when we do a bun.

If you followed my introduction to groom series, you will understand the structure of groom creation where we start with the biggest areas to the smallest. And the next one is the BIG CLUMPS.

On curly hair types this one can get really complex, curly hair types are difficult to make in CG mostly because of our clumps. We have a third clump set. The legendary GUIDE CLUMPING.  Which basically is defined by several big clumps following the flow of the hair and creating gaps.

If you look closely you can see that some of this clumps are actually groups of big clumps, that have a smaller level of clumps inside.

There are several shapes and taper levels on the guide clumps for  each clump. Which is probably one of the hardest part to get on a digidouble like this one. On xgen you can get his by using different ramps per clump with maps as I show over here.

5. Looking at a clump in detail

Knowing that we have several clump levels, we can analyze them and we can get a general idea of how they work. On this case I will analyze one single clump. You ca can define this in two ways, the first one with several guides to make the shape of the clump, or the second one will be using guide clumping.

There is a second level of clumping inside, we can count roughly 5 clumps, on this case this are going to be our big Clumps.

You can see that the full clump, follows under the ear and then goes into the bun, this is the reason why we use guide clumps for this, but will at the same time require control between the guides to get the proper shape as it just clumps slightly the hair and does not use taper on the tip. And at the same time if twists into itself, this can be done easier with noises on the clump level than trying to achieve it with guides.

The small clumps are contained inside of the big clumps and we can count from 3 to 4 on each of them, they hold similar shapes and noise levels, on this specific clump, but if you look closely the small clumps have A LOT  of variation on the level of tightness. This is one of the main mistakes make by groomers, they do not add this variation.

The front part will be the most difficult one to get right on this groom, as requiere a lot of different levels of compression on the base, and also different sizes, on XGEN you can get this by guide clumping of creating the points by hand.

There are two ways to analyze the clumps, by the clump size itself, and by the gap that it creates with the other clumps. On this case you can see the gaps with WHITE. The variation between the different clumps are the ones that gives the realism to this groom, and its normally how the curly hair looks when using a bun or a ponytail. We have some hair gaps were you can even see the scalp and a bit of skin when using them.

The flyaways are a game of seeds your need to find the perfect seed that matches the closest to that. The reference shows  a high scale low frequency.

Another characteristic its that we can see the flyaways clumping, so we will need to create a clump system for the FRAY/FLYAWAYS groom.  On curly hair the hair is normally super thin and tends to break a lot, that is the reason why we have so many.

Knowing that you can see that the hair is denser on top too.

There is a reason why the density line is at the end. Most of the time the density line gets a lot of attention at early stages. Mostly because it has a lot of impact on the silhouette, but the truth is that this should be blocked on early stages but refined till the lasts beats. Density blends are a tricky part of the groom as you depend on another groom the BabyHair groom to make it work.

You can see it here by colors, how much the density line plays a game here. That is why we need to leave the refinement to the final stages because there are many other factors playing along. The clump tightness the silhouette, guides, etc.

Once we know the main problems we can analyze the other parts. But most of the problems will repeat. We can focus a bit more on the bun on the back as we can see better the errors on the flow that we have there.

Now applying the feedback should be pretty simple just seeing the lines.  If you were able to analyze it by yourself I take that as a win!

Thank you so much for following this tutorial/feedback session. Please share if you liked or support us on Patron if you want to see more of these.

Interior Lighting with Redshift and Maya

5 cases when to split your grooms

May Updates for Patrons